Banned, Censored, and the Obscure: Part 1

The Powerpuff Girls: See Me, Feel Me, Gnomey
Season 5, Episode 8 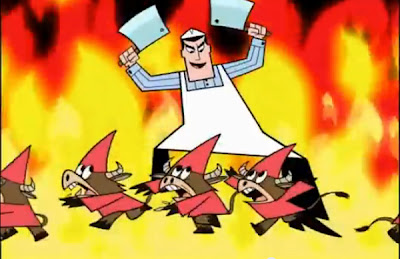 “Can’t you see the people in the street? Lined like cattle waiting for the butcher of freedom. Sacrificing their hopes, their dreams, all their individuality. For freedom. Do the people have to be freedom beef?”
- the professor

Released as part of the 10th anniversary complete DVD series, and currently available on Amazon instant video, this episode never aired on American television. It is a rock opera that makes use of experimental and psychedelic animation.
Some believe the episode never aired in the U.S because of the controversy over a potential political or communist readings. There was no official word on why See Me, Feel Me, Gnomey only aired outside the states, but it was darker then most Powerpuff Girls episodes,  used heavy symbolism and told the story of a cult rising in Townsville.
﻿

The Powerpuff Girls are struggling with the pressures of being superheroes. They wish to live in a peaceful world. Mid battle, a gnome appears to grant them their wish by getting rid of all the bad in the world, but in return they must give up their powers. The girls agree, and the people of Townsville begin to worship the gnome as their leader. 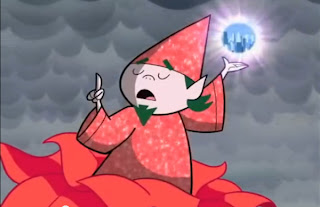 After seeing how the people are being taken in by the cult (and much convincing from their father via butcher song Freedom Beef), the girls conclude that: “You can’t have good without the bad" and "that yin and yang is the master plan.”


After the Powerpuff Girls help kill the gnome, the city turns to worshiping the girls instead. They convince the townspeople to go back to their normal lives, singing: “We know its tough guys, who make it rough, guys, but it takes all kinds, guys, to make the world go round.” A bit more resigned to one’s lot in life, then this better remembered Powerpuff Girls song about what makes the world go round: