Clarence was influenced by 90s animation, and reflects the zany comedy style of early original Cartoon Network shows. It also received a lot of media attention when creator, Skyler Page, was dismissed from the show due to sexually assaulting a fellow artist. That's not what I'm going to be talking about in this post, but I feel it would be remiss of me not to mention it.

Clarence is a show about a cheerful boy and his two best friends. Jeff is one of these friends, and one of the show's protagonists. In the episode Jeff Wins, we are shown his two mothers.

It is not unusual in shows that are pushing boundaries through coding, to hint at something that's never made explicit. But in case anyone watching Jeff Wins thought perhaps the two women were related in some other way (sisters, friends), in a recent episode Jeff calls them his moms. 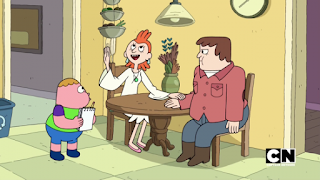 While this in an incredibly huge leap forward when it comes to representation, child-targeted animation still deals with heavy censorship when it comes to LGBTQ characters, and so still must rely on double coding most of the time.

In an earlier episode, a scene where a gay couple were going to kiss never made it to the screen. Instead, Cartoon Network had the men kiss on the cheek.  In what appears to be an attempt to counteract the censorship and show that the relationship was romantic, the music changes while the men have their European style greeting. The lyrics are: "love is love, lovely love." Making it as obvious as possible that the men are a couple, so that the gentle punchline of the scene still works.


To anyone one out there who hasn't checked out Clarence, it is well worth your time. I'm very curious to see what this show brings us next.


Seriously, it's not just pushing boundaries for representation, it's funny too.
Posted by Woods at 11:23 PM No comments: