Ever After High: Lesbian Princess

For those who have yet to watch Dragon Games, this happened: 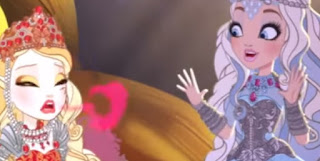 In case some of you readers are not up on your product-based animation series, Ever After High is both a fashion doll line and a web/Netflix series produced by Mattel. It is about the children of fairy tale heroes and villains attending a boarding school together. It is also a huge part of the reason Disney switched their Princess line to Hasbro.
According to this Bloomberg article,  at the same time Mattel was working on this princess spin-off of their Monster High doll line, Disney was developing Descendants (a Disney version of the children of fairy tale heroes and villains going to boarding school together) to be produced by Hasbro. Because of the competition with Ever After High, Disney moved all their princess dolls to Hasbro also. As Clair Suddath writes:

"Several former Mattel employees point to the 2013 release of Ever After High as the last straw for Disney. Chris Sinclair, a Mattel board member who took over as CEO in January, agrees."

Guru Studio, a leading Canadian animation studio, produced all of the Ever After High cartoons in house. It is a stylized 2D ToonBoom animation, while there might be some complaints in similarity in character's body types (since all of the character's are going to be sold as dolls), outside of this it's animation is surprisingly fun.


The primary focus of the stories are that Raven (daughter of the Evil Queen) wants to escape her destiny and thinks others shouldn't feel trapped by their destiny either. The problem with this is that heroes (like Apple White) need their villains to be evil, otherwise the heroes will never receive the just rewards their own fairy tales promise. This sets up a surprisingly fun look at villains that want to be good, and heroes who need them to be evil (with some not so fun advertisements for tie-in products smooshed into the stories).

Which brings us back to the are-they or aren't-they kiss of Dragon Games.

Apple White's curse was meant to be broken by true love's kiss. But, Daring Charming (her fated prince) was unable to wake her when he tried. It was his sister, white knight Darling Charming, who succeeded. Of course, this was not through a kiss, exactly, but CPR. Which, like most double coding, can easily be ignored by anyone who might be offended.

While, a lot has changed since I first started this blog, it seems unlikely that Mattel would make one of the main characters of this series gay, but they are letting everyone sit with the ambiguity.

In their most resent season Epic Winter, it seems that Daring Charming's failed kiss has caused a rift between him and Apple White. It has yet to be established whether or not Apple knows who it was that actually woke her, but Daring get's a new love interest. Perhaps this was simple a smart marketing decision to sell a new doll duo. 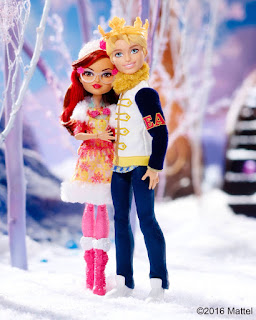 Still, I'm curious to see if Mattel simply writes this all off as "friendship is a form of true love" and never mention it again, or if they will continue to hint at a second reading of Apple and Darling's relationship.
Posted by Woods at 4:43 PM 1 comment: