But what about female duos? Clearly the comedy tradition is not inherently gendered, and live action comedies like The Heat have done well. While there were a handful of female/male duos like Cow and Chicken or Wanda and Cozmo in the 1990s there were no female duo leads, even while the male duo had a resurgence.

When looking at animated female duos, it is important to look take into account the role of female characters in animation. In 1991, Katha Pollitt wrote an article that helped define a common trope: The Smurfette Principle. In the article Pollitt discusses the tradition of a male cast of cartoon characters having only one female character, who tags along with the boys.
“The message is clear. Boys are the norm, girls the variation; boys are central, girls peripheral; boys are individuals, girls types. Boys define the group, its story and its code of values. Girls exist only in relation to boys.”


Nostalgia Chick has a fabulous video that gives an overview of this phenomenon. As I blog about in more detail HERE, the 80s became a spread of marketing based animated shows. The cartoons also became decidedly gendered, with shows like Transformers for young boys, and My Little Ponies for girls. In the nineties, shows became less product based, and less gendered in their marketing. Cartoon’s became more inclusive for viewers. But as the Nostalgia Chick points out, the result was that in the shows themselves, the majority of protagonists were male. Token female characters would be a part of ensemble casts, but primary female character who carried a show were rare.
Looking at Disney Channel cartoons from 1990-2000 gives a good example of this. 10 out of the 24 shows that aired were ensemble shows with no primary protagonist. Even though these shows had an upward of 8 main characters, and averaged 5 characters per show - no show had more then 2 female main characters. 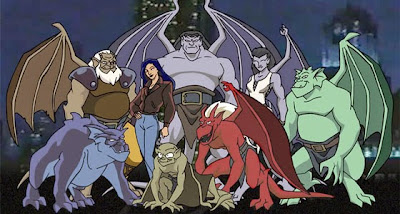 And Disney was leading the pack. It wasn’t until 1998 that Nickelodeon featured a cartoon with a primary protagonist who was female, The Wild Thornberrys. Similarly, 1998 was the year that Cartoon Network first featured a show with primary female protagonists, with an ensemble cast, The Powerpuff Girls.


What would a Female Duo look like if they followed Male Duo traditions?
Two of my favorite web comic artists, Lisa Vandenberg and Rebecca Schauer, co-created an animated web series for a while. It was the first time that I had seen a cartoon that brought the comedy duo to female characters with all of the traditional comedy duo humor (including ambiguous/not so ambiguous relationships). Embracing the hapless idiot and angry friend trope, not only does Nikki and Page embody the best of the “heart” and “brain” characteristics that define male duo comedy in animation – it rises to the standard of bizarre wit that Adult Swim has popularized for older viewers.


Watching this cartoon, is like getting the taste of food everyone tells you can’t be cooked. Of course it can, you’re eating it right now, it’s delicious… but when you try to order it out an a restaurant, everyone simple stares at you blankly and tells you “food like that doesn’t exist.”
Nikki and Page is hysterical, and it doesn’t shy away from overtly “female” comedy. Two shorts in a row joke about menstruation, in the kind of gross-out humor one expects from Ren and Stimpy tradition. Jokes like this don’t fly on mainstream adult targeting animation, humor that deal with “womanly” issues must be coached through a male perspective to be considered universal humor.

Vandenburg  recently posted on Tumblr, about a cartoon that she and Schauer had pitched to Nickelodeon.
“I saw this in my old folder and remembered when me and Becca pitched this show about young lesbian girls who hang out with spoiled snails that have realistic baby faces to Nickelodeon. They didn’t think it was as funny as we did, though.” 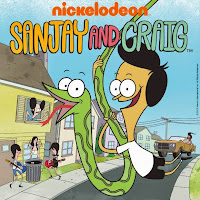 #the world isn’t ready for this kind of greatness

…and though the hashtag is intended with humor, she’s absolutely right. But this is exactly the kind of show (in genre) that was being made with male characters in the 90s. Shows like Ren and Stimpy capitalized on the humor that came from the ambiguous relationship of its title characters.

Vandenberg is now working on Sanjay and Craig as a Storyboard Revisionist. This is a male duo show that matches her comedy style. Seeing an artist like her get an opportunity working for Nickelodeon gives me hope that someday we might see more diverse female characters in shows that are considered not just for female viewers, but for everyone. Maybe someday animated female duos will rise to the ranks of Pinky and the Brain, Ren and Stimpy, and Sanjay and Craig.