Raw Data: All Voiced Characters with a name or character descriptor 2008-2012

Part 1: Ratio of Female to Male Characters (from 2008-2012)
All Voiced Characters with a name or character descriptor
Looking at only American, or American/Foreign Coproduced Animated Films Rated G or PG that were released in at least 500 theaters. If the film contained live action scenes, it primarily had to be about the animated characters set in an animated world* 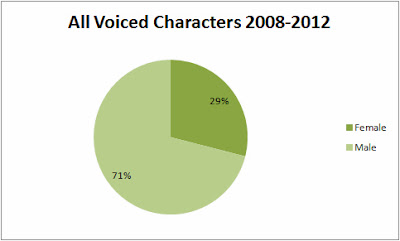