Banned, Censored, and the Obscure: Part 2 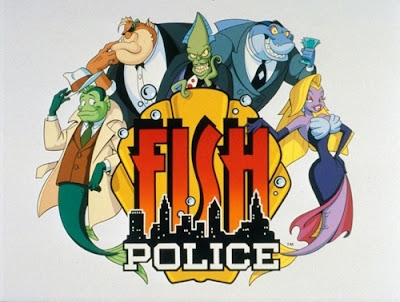 "Hoping to bait the same older viewer that turned The Simpsons into household words. CBS awarded the series a prime-time berth...Not only is upwards of $600,000 being invested on each episode, but the show has the kind of star power rarely seen on the small screen."
-Comics Scene #26 pg. 9

Based on a comic of the same name, the animated Fish Police takes a lighter tone then it's source material.  First aired in 1992, it is a brightly colored 1940s styled film noir animated comedy, underwater. It follows Inspector Gil as he solves sea crime, and tries to figure out whether to settle down with his on and off again waitress girlfriend Pearl, or have a fling with the sexy gadabout nightclub singer Angel. Guns, booze, mob bosses, and (attractive?) fish ladies, the show is narrated with exaggerated film noir monologues, and 4th wall breaking asides by the protagonist. 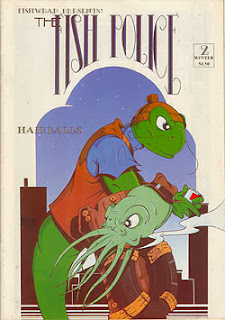 When it aired Fish Police was panned. Six episodes were made, but only three played in the U.S. The next seven episodes (Comics Scene #26 pg. 10) that at cancelation were in some form of preproduction, were shelved and never spoken of. Never released on VHS or DVD, illegal copies pop up from time to time, but even today the brief descriptions you can find online about this cartoon are almost entirely negative.
Because the next phrase I'm going to utter brings up only one hit on the internet (and it refers to the comic), I'm going to say this loudly: I liked Fish Police. The cartoon. The animated version. That show most people like to pretend never existed. I think its fun.
While the humor can at times be obvious, and the plot-lines get lost in the punch lines, it is campy, quick and styled after the early nineties children's animated market. In animation and tone, Fish Police bears much in common with shows that would become the staple of the Disney afternoon lineup like Bonkers, Darkwing Duck, Tailspin, and Rescue Rangers.
﻿

Perhaps it's similarity to the nineties child animated market is part of the reason Peggy Charon, founder and president of Action for Children's Television, took such offence to it (Animated Flops), saying: 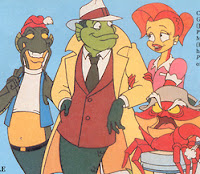 "If CBS put 'Fish Police' on the air Saturday morning, they wouldn't have Peggy Charren on their back, but Jesse Helms."
Despite Charren's assessment, I think Fish Police would have had far more success on a network like Nickelodeon. Much of its humor was the kind of extreme tongue and cheek innuendo that would come to be considered edgy in child's fare, and that shows like Rocko's Modern Life and Ren and Stimpy were praised for.

Co-producer and developer of the animated Fish Police, Jeanne Romano had talked about sending their scripts to the Standards and Practices, and how much heavy editing was requested. They turned to CBS for the last word on how far they could push their humor and storytelling (Comics Scene #26 pg. 11). 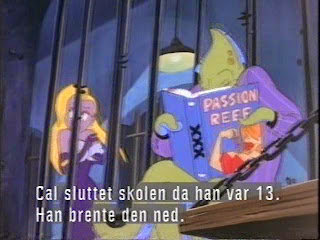 "We looked at the extremes on television, and we tried to stay within the bounds of our own sense of taste. We tried to be clever and sophisticated about what we said and how we said it, so that it wasn't blatant."

By following the format anthropomorphic children’s cartoons of the time were establishing, Fish Police had a gentleness to it that most adult target animation doesn’t today. It wanted to be a Roger Rabbit, channeling golden age animation and zany humor, while reaching out to an older audience.  I can understand some of viewers complaints about Fish Police, but when it hits the right notes, it sings. It reminds me a bit of Rock and Rule  in that regard, it is like watching something wonderful that can’t quite break the surface.  I think with a full season Fish Police could have found its stride.

Instead, it aired three soon forgotten episodes and was, pardon the pun, dead in the water.

Angel is the main suspect in a murder that Inspector Gil is sure she didn't commit.
Episode 2 - A Fish Out of Water:
Gil is partnered with a new hot shot cop who appears to be dirty.
Episode 3 - Beauty is Only Fin Deep:
Gil must try and stop an assassin from killing off the contestants of a beauty contest.
Episode 4 - The Codfather:
The Codfather is murdered, and evidence points to local crime boss, Calamari.
Episode 5 - The Two Gils:
With My Fair Lady flair, Calamari turns a street-wise criminal into a Inspector Gil look-alike.
Episode 6 - No Way to Treat a Fillet-dy:
Inspector Gil believes one of Calamari's three nephews is involved in stealing the money for the Police Charity Ball. Meanwhile, Gil accidentally asks both Pearl and Angel to the dance.
And so the series ends, with the unintended series finale being  of indecisive Gil getting his collar, but loosing both his love interests, who break up with him and depart together.