Part 3: Archetype of the Male Duo
The Male Duo in Live Action
The Male Duo Archetype* in animation has its roots in Vaudeville acts. Originally bawdy stage shows based heavily on their verbal humor, the transition to film led slapstick comedy to being the focus during the silent era. With talkies the male duo comedy acts incorporated both slapstick and verbal humor (wiki).

Homoeroticism has been a part of the genre from the very beginning. Part of this has to do with relationship comedy, where the male characters would deconstruct male/female and husband/wife relationships playing the role of one or the other as part of the comedy act.

For instance in Their First Mistake (1932) where Laurel and Hardy adopt a child. In a conversation that takes place in bed, Laurel convinces Hardy he should adopt a baby, in order to keep his wife's mind occupied. That way they could continue going out at night together and it wouldn't bother her so much. But when they get home with the baby, they discover that Hardy's wife is filing for divorce for alienation of affections blaiming Laurel as the other woman (73). This is used to create a mock husband/wife relationship between them, first with Hardy playing the angry wife whose husband is shirking his responsibilities, then with Laurel playing the wife in a sequence that jokes about breast-feeding. 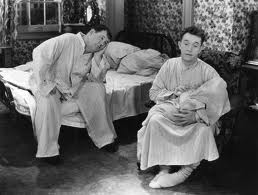 Their First Mistake is unmistakably homoerotic, but whether this was intended, or soley a result of parodying heterosexual relationships it's hard to know. But looking at an earlier Laurel and Hardy, Liberty (1929) we can see, as Russo puts it, homosexuality as a part of farcical misunderstandings (72).

In this movie a running gag involves the two having put on the others pants. They spend the first half of the short trying to find a place to privately switch clothing. The joke hinges on the reaction of those who catch them, and clearly think something naughty is going on. In one case, they are trying to change in the back of a taxi. Caught half-way through by a man and woman, Laurel and Hardy quickly leave, but before the couple enters the taxi the man makes sure no one else is in the back. Who is this third person he's looking for? (a woman perhaps?).

Noticeably, both these examples took place before the Hays code began being seriously enforced in 1934, but even after, "comedy has been able to comment on sexual roles more readily than drama could do only becuase people may dismiss it as impossible farce (74)."

Over time the Male Duo has grown and changed with changing humor and social values. Shows like the Odd Couple tempered the slapstick at the same time they put focus on the humor of increasingly domestic situations, and began to follow more linear naratives. In modern times where gay characters can and do exist as protagonists, the Male Duo has incorporated the underlying homoerotism that once went unacknowledged. Heck, the genre has even been dubbed Bromance. 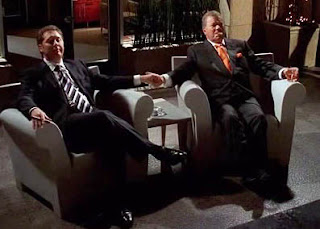 But because Male Duo shows and movies now admit to a potential gay reading of their protagonists, they are also quick to poke fun at such readings, and point out that the leads are not a couple. Even when the characters share a kiss (Dude, where’s My Car) or marry each other (Boston Legal, I Now Pronounce You Chuck and Larry) the characters are always established as soul mates of only the most platonic variety.


I would suggest that the very dance between the gay subtext and maintaining the heterosexuality of the duo (or at least their lack of romantic interest in each other) has become a part of what defines the genre in live action. Humor often coming from how far these boundaries can be pushed, but in the end the Male Duo in live action is an exploration of friendship and platonic male affection.

(Though perhaps shows like The New Normal, Modern Family and Husbands will help establish the legitimacy of a gay Male Duo).

What Defines the Archetype of the Male Duo in Animation?

I'm going to look at two main subsets of the comedy Male Duo in Animation: the Antagonistic Duo, and the Companion Duo. But it's worth noting that while dividing the Male Duo into catagories make it easier to look at specific character traits, its not strange to see a Duo embody aspects of both the Antagonistic and Companion duos depending on the needs of an episode.

In the Antagonistic Duo one characters is the smart protgonist, the other tends to be stupid, angry and if not activly trying to attack the good characters - is at the least the cuase of most of the problems they face. Golden Age cartoons were full of these, like: Bugs Bunny and Daffy Duck, Bugs Bunny and Yosemite Sam, (Bugs Bunny and anyone trying to kill him), Road Runner and Wil E. Coyote, Tom and Jerry, Sylvester and Tweety, etc.

In the Companion Duo the main characters are more of a team, and the stories revolve around their relationship. The characters of these Male Duos are made up of logical "Brains" and the emotional "Heart." Some examples would be: The Brain and Pinky, Ren and Stimpy, Bert and Ernie, Jumba and Pleakley, Timon and Pumbaa.

The way each duo embodies the Brains and Heart traits are part of what makes them unique. Some shows focus on slapstick humor, which highlights the traits of anger and aggression in the Brain character. In some shows the difference in intelligence of the characters is minimal, focusing on the Hearts naivety vs. stupidity. Sometimes the traits will be purely situational. Take a show like SpongeBob, for instance, where he plays the Heart to Squidwards Brains, at the same time that he is the Brains of the duo he creates with Patrick 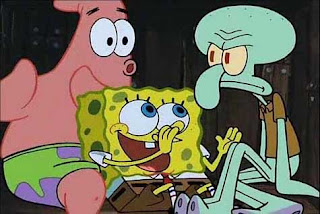 Becuase these traits come out of vuadville comedy duos, it's probabley not surprising that we can see examples of the Brain and Heart in drawn form as early as 1913, in the comic strip Krazy Kat (though the characters are decidedly less domestic then in more modern incarnations).

While in early cartoons most male duos were of the Antagonistic variety, with focus on slapstick humor, there were some Companion Duos (like Gandy Goose and Sourpuss, and Chip n' Dale). Into the sixties more gentle Companion Duos had ecclipsed the Antagonistic ones with characters like: Ruff and Reddy, Yogi Bear and Boo Boo, and Rocky and Bullwinkle (though the Bugs Bunny Show, which reran old Loonie Tunes, kept the classic Antagonistic Duo on the screen). 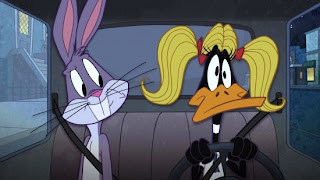 As time went on less and less cartoons featuring duos aired, by the eighties there were hardly any. The early 90's repopualrized the Companion Duo, focusing more on relationship humor and domesticity, at the same time the Antagonistic Duo focused on friendship and domesticity also. So, while the Companion Duo was made up of the Heart and Brain, the Antagonistic Duo became the story of a smart and moral character whose best friend was a selfish idiot.

Despite the cruel nature of the idiot companion, the smart character is loyal and takes responsability for his friend (normally with little visable reward). The new Antagonistic Duo featured characters like: Frylock and Shake, Mordecai and Rigby, and Eustace and Courage. It's probabley not surprising, considering this transition, that in The Looney Tunes Show (2011) Bugs Bunny and Daffy Duck now live together, and episodes revolve around their relationship as roommates.


Homoeroticism and the Animated Male Duo 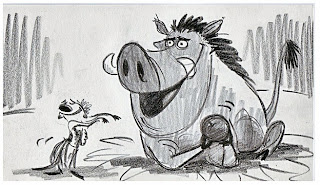 “…animated beings move between, merge, and ultimately deconstruct the divisions of human / animal, naked / clothed, child / adult, and male / female, playing both and neither as the situation warrants.”

Though the animated Male Duo follows the constructs of the live action comedy acts, it can use the fluidity of its medium to dodge potential critique. The characters are very difficult to pin down, and don't wear labels well.

Because historically children’s cartoons are a genre where gay characters cannot explicitly exist, the Male Duo became the perfect place to hide intended ambiguous relationships without consequence. After all, cartoons characters are ambiguous by their nature, and the Male Duo archetype is supposed to draw humor out of domesticity and the relationship of the protagonists.

The common assumption that all children's cartoon characters were by default straight, gave further protection to some shows unsubtle and increasingly consistent characterizations of the male duo as a potential couple. 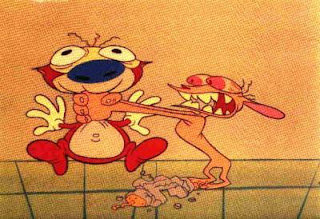 But what about women?