The Lilo and Stitch franchise started with the original theatrical film in 2002, followed by a straight to video movie a year later: Stitch! The Movie. This launched the series (2003-2006) and two more straight to video movies - Lilo and Stitch 2: Stitch has a Glitch (2005), which was written as a direct sequel to the original film, and Leroy and Stitch (2006) which concluded the series. (A Japanese spin-off series, Stitch! began in 2008, but for this post I will be focusing on the American franchise.)


The franchise has been a money maker for the company. At the time of the original films release, Hasbro, which held the master toy license, spoke of how for the first time ever Disney had promised a direct to video sequel before the original film aired (Anne Sherber – Billboard, March 2, 2002) . Sweetening the deal for the company investing in products.


On September third, Lilo and Stitch: The Series aired to much fanfare. In its first month and a half it helped raise Disney’s viewership in children 6-11 62% compared to the year prior. And was “First place among all Monday-through-Friday kids series in key season-to-date ratings.” (Television Week 11/3/2003 Vol. 22 Issue 44, p29).

The title characters, particularly Stitch, have products a plenty, and are the focus of the franchise. In many ways, this allowed the supporting characters of Jumba and Pleakley to fly under the radar.


Jumba is an evil genius who created Stitch, and many other experimental beings. The Brains of the duo, Jumba is: logical, ambitious, more prone to corruption, smart, and a problem solver. He was also married (and divorced) sometime long before the first movie. Pleakley is the Heart: emotional, artistic, loyal, loving. And he isn't only more likely to portray himself as a female; he spends the majority of the series disguised as Lilo’s Aunt (and wife to Jumba).

Uniquely, while comedic relief characters are normally added to cartoons for the benefit of keeping a child’s interest, in this case Jumba and Pleakley delivered many of the campy lines that winked at the older audience.


“…The notion that media texts are split into different meanings for different audiences, where irony and camp are strategically used to “conceal” meanings from the mainstream, has been noted as an important part of audience identification in gay communities.” (Kids Rule Nickelodeon and Consumer Citizenship Sarah Banet-Weiser pg. 189).

Unlike other prominent male duos, like Ren and Stimpy, Jumba and Pleakley exist in a linear reality. Things that happen in one episode affect the episodes to come. For instance, one of the shows reoccurring antagonists, Gantu, has repeatedly torn the roof off the home all the character's live in. In response, Jumba builds a hinged roof system (Season 2, Episode 4), so at the very least they won't need to do massive home repairs every time Gantu decides to attack them.  While there isn't much of an overarching story for the seasons, each episode introduces a new cousin that Lilo and Stitch (with the help of Pleakley and Jumba) must catch. These cousins are recurring characters and are remembered from one episode to the next. 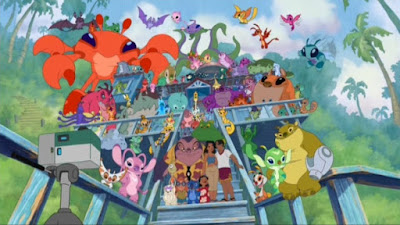 Because of the linear reality, consistent characterization holds a different weight for the characters. When certain characteristics are repeatedly enforced, and developed over the course of episodes it's hard to believe that the creators were unaware of the second reading they were creating.

It is worth noting that the series was on television before there had ever been an official out character in a child-targeted american mainstream cartoon. Even if there had been a want to write the characters as a couple they could only have been coded as such.

nothing official has ever been said about Jumba and Pleakley by their creators, so there is no way to guarantee that any of the choices in how the characters are presented are anything more then an untended double reading by viewers. Both Jumba and Pleakley are aliens, so the show plays with the fact that they don't know a lot about human culture and social expectations. Because they are in hiding and their disguise is being Lilo's aunt and uncle, a lot of coded behavior can be hand waved away. Despite the fact that there are many very consistent characterization (that certainly point to a QUILTBAG friendly reading of the characters) there is a safety in how humor is used in the show, so that nothing needs to be taken too seriously.


But, boy is there a lot of consistent characterization. Let's take a look in: