Unintended Double Reading – and why it is culturally significant:

Batman and Robin may not have been intended as a gay couple, but the outing of their characters in the Seduction of the Innocent had a lasting cultural affect. It increased censorship in comic books through the creation of the comic code, educated parents on the possibility of intended gay coding in children’s media, and it affected the way society viewed the two characters identities.

I think this is one of the most interesting parts of unintended double reading - how society creatively critiques the media it consumes. The Ambiguously Gay Duo is perhaps the most obvious example of a riff on Batman and Robin’s ambiguous relationship – but it has also been examined on shows like the live action Tick and Venture Bros. The controversy has become such a well known part of the characters history that DC has on occasion (subtly) poked fun at this reading of their characters.

In a roundabout way the public outing of Batman and Robin legitimized the possibility of gay readings in ambiguous characters. Marvels mutants Rictor and Shatterstar had shared a similarly ambiguous friendship until 2009 when they were outed as a couple (in X-Factor vol. 3). Retroactively making canon a subtext that up to that point had been treated as an unintended double reading.

“They’re two grown men sharing a house and a bedroom… they share clothes. They eat and cook together. They vacation together and have effeminate characteristics-” he goes on with his list of examples, finishing by saying, “If this isn’t meant to represent a homosexual union, I can’t imagine what it’s supposed to represent.”

(...according to official statements, the were meant to represent friends)

While Joseph Chambers aggressively attacked the Muppets for their blatant disregard for heterosexuality, his statement was embraced (often with a sense of humor) by the LGBTQ (and straight but supportive) community.

Despite the Children’s Television Workshop’s official statement to the contrary the two muppets had already become icons, the possibility of a gay reading was now a part of their identity. And it had a ripple effect.

There is a reason QueerPioneer created a parody using the characters when they relaunched their site:

Family Guy poked fun at the gay-reading of the characters (set within a gritty crime drama, the scene is all the more funny for how not child-friendly it is):

Avenue Q, the adult targeting musical that parodies Sesame Street has the puppets Rod and Nicky as stand-ins for Bert and Ernie. Rod is aggressively closeted and not-so-secretly in love with his straight roommate Nicky.

In 2002 the independent short Ernest and Bertram creates a black comedy by taking a scene from the Children’s Hour and reenacting it nearly line for line but with Bert and Ernie as the leads. After it first played, Sesame Workshops lawyers blocked further showings of the short. It’s well worth a watch though, and is fascinating in a historical context. The Children’s Hour dealt with the topic of (the at the time unspeakable) lesbian love, and was released at the tail end of the Hays Codes.

Ernest and Bertram is a mix of dark sentiment.  On one hand it seems to critique children’s show censorship, where gay love is just as taboo a topic as it was in movies from 50 years ago - but on the other hand it revels in its own irreverent irony (this episode was brought to you by the letters Y and the number 1…)

The above video is a rant from an upset (fan?) obviously not a product of the lulz generation he doesn’t seem to realize that the first outing of the characters was by one of his religious own. 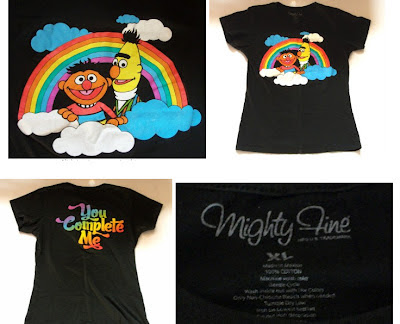 It also disregards the fact that though Sesame Street’s official statement says that the two are not gay, nearly two decades since the first time their relationship was called into question, the studio is now in the know. There is a reason that several official products marketed to nostalgic grown up fans wink at the (completely unintended) Double Reading of the two. 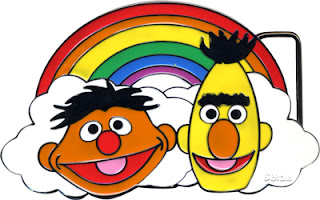 Bert and Ernie may just be two in a long line of unintended Double Readings, but I would argue that whether or not a character is intended to have a gay-reading when society embraces this (even in jest) it opens the closet doors just a little wider.


The Cartoon Closet
Posted by Woods at 1:56 PM