Double coding is used to create a subtext or second reading of a text that speaks to a multiple audiences or sensabilites. This is very common in the use of adult humor or subtext intended for the older audience of a childrens show. It is also used to target multiple demographics of a show, while not ostracizing the main market.

Because of the sensitivity of what is considered appropriate on children’s shows double coding can also be used to establish aspects of a character that if stated explicitly would not make it past the censors. "Questionable" aspects of a character will be consistently, and carefully coded over the course of seasons.

In Hey Arnold! Helga's mother Miriam was coded as an alcoholic. She suffers from depression, she is disoriented and irresponsable (will forget to pack her child's lunch). She is found "asleep" i.e. passed out in different places in the home. She is often seen with a smoothie in hand (or making one), clutching at her beverage as she slurs her words, and saying "I need a smoothie," when things get rough.

In scenes where Miriam is holding a coffee-mug you can normally hear the sound effect of ice-clinking, implying something other then just coffee in the cup. In the series she had to do community service and had her driver’s license revoked for reasons never explicitely stated.

Despite how clearly it is coded, there is still plausible deniability. Perhaps Miriam is just forgetful, and narcoleptic, and LOVES smoothies. In cases where a show is dealing with content considered inappropriate to explicitly show on screen, it can be difficult to prove that the content was intentional and not an unintended reading by viewers unless it is confirmed by the creaters and or writers.Which in this case he did. Craig Bartlett has said that if The Patakis spin off been picked up (staring Helga at 15), Miriam would have been in AA.

Lesbian and gay characters are the subject of intense scrutiny, from all political camps, when they are on adult programs; their presence on children’s programs in unthinkable from the networks’ standpoint, although clearly not from the animators’ standpoint. Any attempt to represent a gay- or lesbian-coded character on a children’s television program, with or without homophobic intent, is sure to raise red flags among censors. (55)

As Hendershot says, some animators - as well as writers and creators - try to incorperate gay characters despite heavy censorship. So, while networks deny their existence, carefully coded gay characters do exist.

Hey Arnold! has an example of a gay coded character: Arnold's teacher Mr. Simmons (also confirmed by Bartlett).  The most obvious episode of sneaking this past the censors occured in the Thanksgiving episode in which Mr. Simmons implied boyfriend, Peter, was shown.

In this scene Mr. Simmons introduces Arnold and Helga to his family (his mother and uncle) and friends (Peter and Joy) sitting at the table eating Thanksgiving dinner. Though subtle, the scene shows his mother being in denial about her son's sexuality, and trying to set him up with his female friend Joy. The mother says pointedly that she "didn't know Peter was coming today" to which Peter replies "There's a lot of things you don't know." 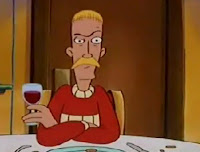 Mr. Simmons mother looks shocked and then becomes angry, turning to her son, she suggests he take Joy  to the ballet on Saturday. Mr.Simmons (who spends most of this scene trying to smooth over the awkwardness) says he loves the ballet, but when Peter coughs, crossing his arms and giving him a disaproving look, Mr. Simmons finishes his sentences by saying, "...but I'm busy on Saturday."

Becuase the episode was supposed to show a disfunctional Thanksgiving meal, it is easy to see how the underlying issues hinted at in the arguments went unnoticed by censors (until the episode aired). Again, no matter how clearly a character is coded over the course of seasons, there was still a wide berth of plausable deniability for a network to cling onto. And even with Bartlett's interview specifically stating the Mr. Simmons was intended as gay, fans can brush this away by the fact that if it were canon, it would have been explictly stated in the show (despite the fact, of course, that it couldn't be).

The Cartoon Closet
Posted by Woods at 10:11 PM