Banned, Censored, and the Obscure: Part 3 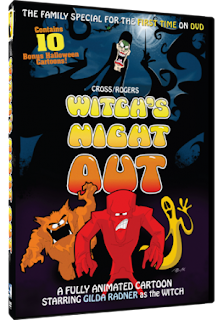 When I was at the store they had a  Halloween cartoon for sale that I haven't seen in years. Every year after trick-or-treating my family would watch this special. While not banned, or censored, this is one of those strangely obscure cartoons that has a cult following and is not well remembered, (despite the fact that it was released on VHS, and aired every year on the Disney channel and Fox through the mid nineties.)

This is the first year it has been released on DVD. Blogger and author Adam Selzer has the most  information on this cartoon, and a fabulous interview with Jonathan Rogers the creator of Witch's Night Out. Rogers apparently had no idea until about five years ago that the special had even been airing for all those years, or that it had such strong fan base. He currently has partnered with Jimmy Cross and written a Valentine and Thanksgiving special that *fingers crossed* will soon be made.

Witch's Night Out is the story of a morose witch who has been out of work for some time. Meanwhile, the adults of the town decide to throw a Halloween party in what they believe is an abandoned house (really the home of the witch). The adults are out of touch with their child side. None dress up, and  Goodly who helps plan the event sees the whole thing as a sort of community building activity. Tender and Small our child protagonists want to celebrate the spirit of Halloween and reach out to the witch to help them.

The character designs are like nothing you've seen before. Each character has a playful outline and is painted a monochrome color, with the kind of inky edges that makes me think Shinbone Alley. It is vibrant, fun, and the perfect kind of kid-friendly creepy. It starts with a catchy song, blasts through the twenty something minute short, and ends with everyone happily embracing the Halloween festivities.

I remember finding this cartoon visually enthralling as a kid, but I also remember loving the ending. Halloween is about having the opportunity to be someone you're not, but it is also - as is the case for the gently wicked Malicious and Rotten - an opportunity to explore who you could be. Even just for a night.

Having just rewatched it I can definitely recommend the DVD, it cost me a whopping $5 on sale for Halloween, comes with some golden age bonus cartoons, and has been gloriously remastered. It was also everything I remembered it to be.

Check it out here: http://www.witchsnightout.com/
Posted by Woods at 10:15 PM