Part 6: The Repopularization of the Male Duo
The repopularization of the male duo was directly tied to the creator driven animation movement that blossomed in the nineties. And the explosion of male duos shows was all the more striking in comparison to the eighties which was (almost) completely void of any. Lets looks at some historical context.

A Brief History of the Eighties

Under president Reagan there was a heavy deregulation of children’s media. Limiting the number of commercials targeting children was called out as violating an advertisers first amendment rights. Mark Fowler the elected chairman of the Federal Communications Commission continued the job the president started, saying “The marketplace will take care of children” (Education).

And take care of them it did.

﻿The 1980's became a spread of half hour long commercials. The more insidious ones are perhaps less remembered today, but the majority of cartoons in the eighties were designed to sell: 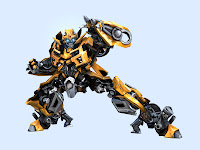 Each of these a product first, and developed into cartoons with the express purpose of shelling toys to kids. By the mid 80's there were 40 different animated series on the air with licensed products actively marketed along side the shows (article here).
Now we view some of these cartoons with the rosy haze of nostalgia and some have been revamped and re-imagined for the children of today, but at the time these shows were often hyper aggressive in their marketing. Advertising took precedent over quality content.


Heather Hendershot talks about how products would correlate with episode plots: 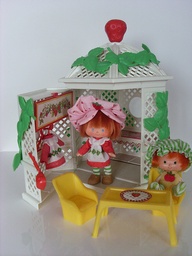 In the ‘Big Apple City” episode, Strawberry Shortcake goes to the city to win a new gazebo (also available in toy form) in a bake off; she makes new friends along the way in ‘Spinach Village” and “Times Pear.” Indeed, virtually every show introduces new friends, vehicles, or houses, all of which were available for purchase in toy form (119).

Cartoons that wern't based on products were almost entirely spin-offs of pre-existing shows or movies (like the All-New Scooby and Scrappy-Doo Show, or Fonz and the Happy Days Gang). The few original shows on the air, were primarily long running series' started in the 70s (like Fat Albert) and just like cartoons based on marketing products, these shows also had heavy creative restrictions.

At this same time, watchdog groups gained increasing clout. Mark Evanier, creator of the Dungeons and Dragons cartoon, talks about this:


Nevertheless, they all seek to make kidvid more enriching and redeeming, at least by their definitions, and at the time, they had enough clout to cause the networks to yield. Consultants were brought in and we, the folks who were writing cartoons, were ordered to include certain "pro-social" morals in our shows( Evanier).

The cartoon Dungeons and Dragons was used to promote D&D products, its three season run spawned more than 100 licenses (Wizards). But it's obvious that Evanier, like many writers and artists at the time, struggled to create authentic characters and a strong story. But the creative freedoms he was given were further clamped down by these watchdog groups.

They pushed for the addition of pro-social lessons at the same time they proclaimed the show too violent. The result was the creation of Eric, a character whose sole purpouse was to contrive a moral for each episode (Evanier). Steven Starker in his book Evil Influences writes about the push to add a warning during each broadcast stating that Dungeons and Dragons had been linked to real life violent deaths (153)”

So, it’s not to say that writers and artists didn’t strive to be creative on the cartoons they worked on, but it was within tight confines. In retrospect the (perhaps well intended) morals and lessons taught on many of these shows seems like a sad attempt to counteract the obvious advertising with a cheap pretense of depth. As Hendershot put it “Commodities function as symbols of love and sharing in Shortcake narratives (119).” And Miss Shortcake was not alone in this regard.

The Late Eighties
The struggle against the creative censorship within studios and the moral censorship outside of studios began to take hold in the late 80s – with shows like Pee-wee's Playhouse paving the way. Walker talks about the struggle to bring creative content to the screen:

In 1985 Saturday morning television was the left hand of the entertainment business. On the network side, the children’s programming executives were risk adverse and violently skeptical of anything that might be considered artsy or creative. On the supply side there was Hanna-Barbera, Ruby Spears, and newcomers, Nelvana, Marvel, and DIC. I realized if I was to accomplish anything truly groundbreaking I would have to do so from the ground up, and covertly. To go through conventional channels was to risk seeing it crushed at inception, or worse, handed over to one of the “approved” cartoon mills (Gaines). 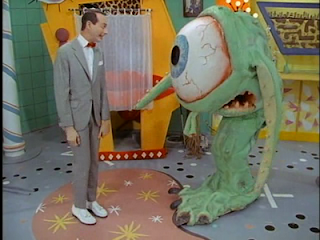 For a great overview of the late 80's animation revival I suggest this article by Martin Goodman. But to briefly summarize, the popularity of Who Framed Roger Rabbit helped renew interest in classic Golden Age cartoons, the Little Mermaid led to the revival of Disney (which had suffered a decade of poorly received theatrical releases), and Akira began to introduce anime infulenced narrative and visuals into American animation.

I would like to also add to this list the influence of one more cartoon:  Mighty Mouse.

Mighty Mouse: The New Adventures, aired in 1987and ran for two seasons.   It was creator driven, inspired by classical animation, and pushed for zany cartoons. As John Kricfalusi put it: 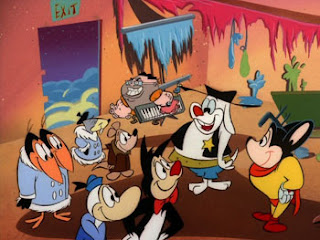 "We felt like Ralph Bakshi had freed us from bondage. We wrote the stories ourselves, were allowed to experiment with visual styles, with acting, with anything that struck us creatively. This was the absolute opposite of the situation in animation in the 1980s, where cartoonists had no input and cartoons weren’t allowed to be imaginative (John K.)."
Mighty Mouse helped influence the creative process and artistic language and humor of nineties animation (which I will go into in more detail in the next blog), it was also a creative springboard. Most of the writers and artists who worked on the show ended up going on to work on other influential cartoons, like: John Kricfalusi, Bruce W. Timm, Jim Reardon , Tom Minton, Lynne Naylor,  Rich Moore, and Andrew Stanton (for more click here).
In 1990 the Children's Television Act was passed. It set in place limits for the amount of advertising on children's shows, and on the standered for educational quality of these shows (Andrews). Putting an end to nearly a decade of advertising as king.
﻿
Though the Children's Television Act wasn't perfect, and created it's own limitation, I would suggest that if not for it passing there wouldn't have been the creator-driven animation movement of the 90s. I realize that might be a controversial statment to make so, I'll explain.

Because so many cartoons in the eighties were based on products, it was more important to keep the consumer (ie the parents buying toys for their kids) happy, then to take creative risks on a show. Also parent groups had good reason to be putting up such a fight, because they were fighting against obvious deregulation of children’s media. Becuase there was now a guidline for children's programming there was not the same need for such aggressive watchdog groups. In fact, the ACT, who helped pass the Children's Television Act disbanded in 1992 (Arnett).

In the nineties cartoons became valued not for how efficiently they were selling products, but for their content as entertainment.  Though there was still creative and moral censorship in the nineties, both from outside watchdog groups, and internal standards departments, there was far more creative freedom allowed. Studios were more willing to negotiate the changes requested, and to defend the integrity of their shows against critique.


Many of the shows in the eighties were ensemble casts; this was great for both selling a wide selection of collectable characters, as well having a big enough cast to easily deal with different cliche vices, or on teaching lessons of cooperation. It also meant that, by defualt there were very few shows that had male duos (that fit within the definition established in Part 3).


Only two shows featured male duos as the main protagonists, the short lived Droids (1985) - with one season. And Chip n' Dale Rescue Rangers (1989), which had the styling and story telling of the soon to come 90's "Disney Afternoon" lineup. Including shows with minor reacurring male duos, we can add Mighty Mouse (1987), whose male duo characters were influential, but in only a handful of episodes, and Sesame Street's Bert and Ernie. If one was truly desperate, an argument could be made for Yogi's Treasure Hunt (1985) which would often split it's large male cast into pairs, but with very little focus on traditional duo comedy its a stretch.
The nineties push for new and creative content saw an explosion of shows that featured male duos, not just peripherally, but as the leads.


This was mainly due to three things: 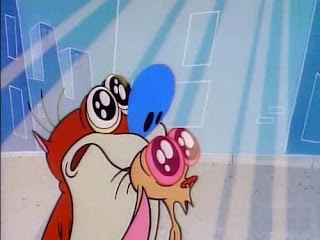 Part 7: The Ren and Stimpy Effect


*A small disclaimer. This is not to say that there were no good shows in the eighties, or that the animation of the eighties was not influential in its own way. I’m also not saying that there weren’t shows of questionable quality in the nineties. But the nineties was a creative renaissance, in that networks were willing to take risks on new shows and new visual storytelling styles. Artists and creators were allowed a type of freedom unprecedented in the decade past.
Posted by Woods at 10:53 PM